As we entered a new century the two major players of the first era of timber had gone or were on the way out. Donald Fraser’s Longwarry Timber Company had been declared bankrupt and W.H.Collins auctioned off his business in 1903.

Even in 1903 drama surrounded Collins’ as it had done so for most of his time in the district. The story goes, a story we have read in a number of sources, is that local shop keeper and friend Tom Maisey was bidding at the auction as dummy bidder and ended up winning the auction, something that he was none too happy about.

Well known identity Lindsay Laurie has written a poem about the story:

When Longwarry Sawmills came to their demise,
an astute W. H. Collins managed to survive
through the bank collapse when he brought this business out,
because he had a firm direction; that goes without a doubt.

Collins laid a tramline to Labertouche for the mills he brought,
to the Kydd site and McDonalds, for timber that he sought,
but a new direction was in order, with a Moe interest hold,
so his mill near Ryson’s Creek through an auctioneer was sold.

‘Come on everybody, please step up this way.
Henry Hansen and Company is your auctioneer today,
so when you make your bid; make it clear and loud’.
Collins had a dummy bidder, standing in the crowd.

Tom Maisey was the dummy bidder who kept pushing up the price,
but the bids against him fell away – Going once! Going twice!
And so the mill was knocked down upon the auction floor,
to the dummy bidder for, one thousand pound plus twenty more.

Tom Maisey was furious that he’d bought into this mess,
while Collins stood there grinning and couldn’t care a less,
for the mill stood where the timber, had long passed its peak,
so the son of Tom who managed, moved the mill to Sardine Creek.

But with low prices and high wages, horses and litigation,
with-in a year Tom’s sick and tired of this situation,
so Freeman brought the mill, but not the way Tom did –
who still cursed that day when he made the dummy bid.

‘Come on everybody, please step up this way.
Henry Hansen and Company is your auctioneer today,
so when you make your bid; make it clear and loud’.
Collins had a dummy bidder, standing in the crowd. 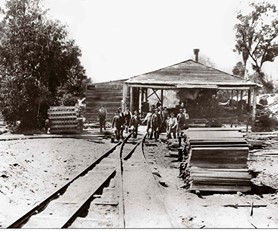 Son William (Bill) took over the running of the Mill with R.C. McKay as the manager. Bill Maisey immediately began work on improving the business. The timber around the Labertouche Mill site had been cut out and so the tramline was extended to serve the Sardine Creek area and a mill established there.

William was keen to further develop the logging activities and to make the business work. However times were tough and the recovery from the 1890’s depression was slow, coupled with a reported wages bill of 600 pounds per month, Tom was fed up and sold out to John Freeman in 1905 who became a major player in the industry for three decades to come.

Freeman had come to the district from Beaufort north west of Ballarat and he had been a very successful sawmiller there and like those before him, the tall stands of timber in the district were a great attraction.

He immediately started upgrading the existing infrastructure by rebuilding the tramway in many sections that had become badly neglected; he rebuilt many of the bridges and refurbished the Sardine Creek Mill.

As in so many instances in history, luck can favour the brave and by 1906 timber prices had begun to improve, the construction of a second tramline beside Maisey’s extension doubled the capacity of moving timber from the area.

Not everything was plain sailing for the Freeman brother’s. In 1908 only a few months after installing a state of the art steam engine at their mill it was damaged by fire, this closed the operation down for several months. They had no sooner reopened work when a fire destroyed their tramway bridge over Ryson Creek cutting off access to Longwarry. All hands were set to work on repairs which had the line reopened in just two weeks.

In 1909 John Freeman continued to expand his business by extending his tram line to the junction of the Bunyip River and Tin Creek some 22 kms north of Longwarry, which then facilitated moving his mill further out. It was not uncommon for these bush mills to continually be broken down and moved to new sites as the timber around them was cut out.

John Freeman was joined by brothers Alex as a partner and Thomas as an employee, they then set about building a new Mill at Lawson Creek in partnership with R. Pearse, a mill that continued operating until 1934.

As prices and productivity increased the industry was moving along nicely but huge growth was just about to land in their laps as war broke out in 1914. Timber was in demand for everything from building camps to supply wagons and any amount of equipment that armies needed.

Instead of things declining at the end of World War 1, the reverse happened, mills were kept busy with even greater output needed as a change in public attitudes and aspirations came with a new era of community expectations after the savagery of the War.

John Freeman retired from the business in 1916 and his sons, Alex, Tom and Jack (Chummy) were put in charge of operations.

The mills provided full employment, good wages and regular reliable income and this under pinned the growth and prosperity in the district as a new industry emerged on the cleared land, dairying was very much beginning to show just how it would contribute to future prosperity.

By now there were several other operators in the area, all were using the Freeman tramlines by running their own small branch lines to intersect with the Freeman line or by carting timber to his line, to take their timber into Longwarry.

Both the ravages of time and the increased use had caused deterioration in the line and so it was decided that they would have to pay to assist with upkeep of the tramline, however this did not work out as well as expected.

The major users apart from the Freeman’s were, Proctor, Nash, Kerr and Smedley so it was decided that each one would take responsibility for a section of the main line, whilst looking after their own branch lines and this did work well for  sometime.

Unfortunately good times don’t last forever and by 1926 the industry had started to slow down again, but it was another bushfire, a constant threat that locals have known only too often, had a major impact on the Freeman’s operation as with many other saw millers in the area.

Known as Black Sunday, huge fires again hit the timber industry. From Noojee to Powelltown fires raged and Freeman’s mill was directly in its path.

Fortunately the fires arrived at the Mill on the Sunday when many of the workers and families were in Longwarry for the weekend, there were ten people who were at the mill on this Sunday and they took refuge in Freeman’s house.

Reports of the dramatic events on this day have it that although the house had a firebreak around it the three men, Lang Towers, Dick Armstrong and John Freeman had to douse flames with buckets of water as they struck the house. The house, the three  men, women and children, ten people in all, survived and after the fires had passed they began walking along the burnt out tram line towards Longwarry. A party that had set out from Longwarry to check on folk from the mill found the men totally exhausted and having to be led by the women as the smoke had temporarily fully blinded them.

Yet again the tramlines were rebuilt but as it turned out it was the beginning of the end, as roads or rather tracks were extended, loads became heavier with logs coming into Longwarry rather than sawn timber, vehicles began to appear and ongoing maintenance became prohibitive. It was not unusual in winter for fully loaded wagon wheels to sink into the mud. The drivers on their own, aided only by their horses, would carry nails and equipment to repair rails as they went along them. And so by 1933 the Freeman line, much of which was originally put in place by Fraser and Collins way back in the 1880s and 90’s, closed down.

These fires pretty much put an end to the bush mill communities with the workers and their families living on site, as it was obvious that surviving fires such as these by whole families with almost no escape route was far too dangerous.

The small communities closed down over time and they moved into Longwarry which became the hub of the industry as mills in the town were established or extended as we know them today.

In these stories we have concentrated mainly on Donald Fraser, W.H. Collins and John Freeman, but readers should not think that these were the only significant saw millers from 1880 to 1933.

Operators such as Proctor, Pearce, Smedley and Kydd were very active, Alec Kerr and William Gardner established mills operating to the south of the town out towards Modella and King Parrot Creek, with mills actually in the town itself. 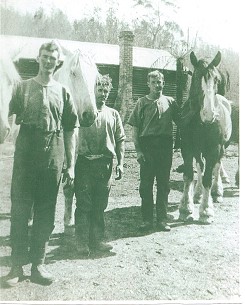 Nor should readers think that the closing of the tram line was the end of sawmilling, Freemans continued to operate, Earl and Ivan Tout took over abandoned leases in the Tonimbuk area which the Proposch family, who had come to Longwarry during the 1930’s, took over in 1950’s.

There are still two operating sawmills in the town and the names of those who worked for the operators are still scattered throughout the district, families such as Eacott, Proctor, Ford, Gardner, Hickford, Maisey, and Proposch, are just a few and it is our aim to provide their stories as we review the early pioneers in the district later ——- and for that we will need your help.