The following Brief History of Modella is an edited account from the work of Mr. Graham Utber compiled in 1968. In some instances direct transcripts have been used. We gratefully acknowledge his work.

It was not until 1899 that the eastern edges of the Kooweerup Swamp were drained and it was declared suitable for occupation and farming. The area was first known as Kooweerup East and later became Modella.

However this area of land was well known to the indigenous population well before this as there are several sites in the area that have clear signs and relics of their frequent visits and activities, particularly around the Yallock area, a word in the local language that means water or creek. There are many examples of weapons and burial grounds being found and it shows it was an important area for the aborigines over a very long period of time.

Plans to release parcels of land in 1900 were severely hampered when a large flood covered the proposed settlement areas. This resulted in two more large drains being dug and an upgrade and clearing of a further 8 drains that had already been put in place.

The chief engineer in charge of the drainage works was Mr. Carlo Catani who was born in Florence Italy in 1852 and arrived in Melbourne in 1877 and became the chief engineer for The Victorian Public Works Department.

Catani saw to it that local settlers were employed in the drainage work which was a very expensive and difficult undertaking, particularly when one remembers that the Country was still recovering from a very severe depression through the 1890’s.

The major concerns during flooding events were the Lang Lang River and the King Parrot Creek, because when these two water ways flooded the drains around the swamp were unable to carry surface water away.

In Melbourne there were considerable reservations about the viability of being able to adequately flood proof the district and whilst significant progress on securing farming land to the west and south, East Kooweerup or Modella as we now know it, was still considerably behind these parts of the swamp.

Further floods in 1911 and 1916 did not help the situation and with the outbreak of World War 1 the supply of labour for drainage works was considerably impacted as men enlisted to go to war.

Settlement in Kooweerup East/Modella took off in the early part of the 1920’s as soldier settlers were allocated parcels of land to take up and pay for over a period of time.

However these settlers were still in a very precarious position as drainage work was still badly needed, as evidenced by another flood in 1923, rated twice as bad as the 1911 flood, hit the area and the early farmers suffered huge losses of pasture, buildings and stock.

The rainfall at the time was recorded as 15 inches around 375mm above the yearly average and it was reported that a stretch of flood waters some fourteen miles long and 5 miles wide covered the swamp. In today’s measurements that is nearly 23kms by 8kms.

The soldier settlers were in dire financial circumstances and had trouble meeting their financial repayment to the Land Purchase Board and unless they were able to obtain outside work many were forced to just walk off their land.

A Commission of Enquiry was set up and they were very aware of the circumstances related to drainage, but perhaps in an effort to divert attention away from insufficient resources allocated to drains and infrastructure, they also wrote that “many of the soldier settlers were inexperienced farmers, and many of them suffered from wounds and diseases contracted during the war.” They believed that these were major factors in the soldier settlers being unsuited to the work of farming. We think it may well be an example of blaming the victim.

Matters were made worse as potato prices (a major crop on the swamp as we know) and dairy prices had slumped again, greatly reducing the incomes of those very resilient settlers who worked hard and battled the odds to maintain their farms and families.

Another massive flood occurred in December 1934, reported as the largest ever to hit the swamp. Records show that 1000 people lost their homes, stock losses of 8000 head occurred and infrastructure such as roads, drains and bridges were damaged.

“About 1900 the following men were known to have some claim to selected blocks in the Modella area: Douglas, McGregor, McFarlane, O’Callaghan, Ryan, Temby, Hanley, Kelly, Schmutter, Shandley and Smethurst, who may have been the first settler. Whether or not they resided on the blocks is debatable but we do know that Smethurst and Douglas had built homes on their properties before 1900.” – G. Utber – A Brief History of Modella

It is known that blocks were selected by M. Chambers in 1902 and by S Rogers in 1903 and quickly followed by a Mr .T Martin who left his family in Melbourne. In his work Graham Utber writes “Mr. T. Martin, for example, used to ride a bicycle to Melbourne every few months before he brought his family to the area.

Although the drainage still left a lot to be desired more parcels of land were opened up around 1903 and as we have seen in other areas around the district, families meant children and children meant a school was needed which was built in 1903/04. (See later in this story).

The school gave locals a place to meet and hold social functions, a common advantage right throughout the district when the first and only available public building was the school.

A commercial enterprise was begun in 1906 when a Mr. Hughes built a small shop incorporating a Post Office. Apart from selling some lines of groceries and sweets he also delivered mail every second day by horse and jinker. We believe this store was opposite the school on the corner of Chambers and Fisher Roads.

The Longwarry/Modella Road was built in the early 1900’s which gave settlers access to a raillink for sending their produce to markets mainly in Melbourne. 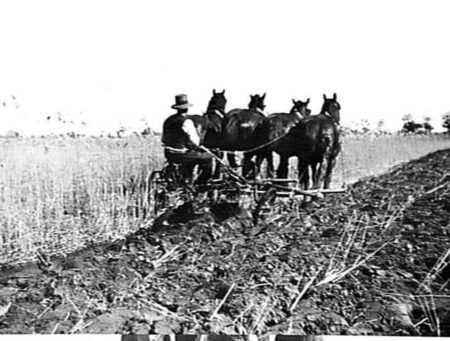 Dairying was the main land use in the area and we presume that, as was the case with most dairy enterprises in the district, most of the milk was separated for cream by a hand separator and delivered into Longwarry Station for transporting to a factory in Dandenong. Two or three of “the larger farms” milked around 60 cows by hand, with the first recorded milking machine being brought by Mr. Schmutter around 1910, which is also the time that the first truck in the area arrived, owned by a Mr. Douglas.

Financial circumstances and probably more likely the boggy conditions meant that mechanisation was not a part of farming in the area and the use of bullocks and horses were the main sources of land clearing support.

As mentioned elsewhere in the story of district education, the 1872 Education Act required all children to either attend school or to have alternative arrangements made for their education. By 1900 there were very few children in the area and even fewer roads, school alternatives were at Bunyip South (now Iona), Yannathan, Longwarry South or Longwarry and as the few roads that did exist were virtually unusable for significant parts of the year, home schooling was the most common form of education.

By 1902 this situation was to change as closer settlement meant more families and more children were in the district, so the move for a permanent school began.

There appears to have been considerable correspondence to the Board of Education on the matter of establishing a school. Reports were written by inspectors, petitions taken up and letters from various residents of what was still known as Kooweerup East were written.

Unfortunately there were many conflicting interests and proposals for a site which complicated the decision making and stalled any progress in obtaining a permanent site.

Eventually a room was leased from a Mr. G. Gray and by early 1903 local children were attending organised classes for about 12 students. A Mr. Rumpff was appointed teacher and he rode his horse out from Longwarry each day to take classes.

The push for a permanent school continued and three sites were proposed, all had their own particular group of residents favouring one or the other, generally based on proximity to their own homes and the ease of travel over very poor roads and tracks.

Finally it was decided that a parcel of land was to be leased from a Mr. Douglas on a property known as Modella Park for 8 pounds for two years beginning the first of January 1904. This became the permanent site of what was to become the Modella State School. It would seem from correspondence at the time that this was the least favoured site for the majority of the locals.

Mr Douglas undertook to have a building erected by the end of the Christmas holidays and with the help of some local residents, had a school ready for the beginning of the 1904 school year. This building stood in its original position for some 63 years.

Kooweerup East/Modella State School No. 3456 which had commenced on April 1st. 1903 in a leased room closed its doors for the last time on December 17th. 1993 leaving a 90 year legacy of memories.

As with all small communities throughout the District the school became more than just the place that children went to learn. The School was a focal point for community gatherings, Church Services and Sunday School Classes were conducted there, along with various nights of entertainment, which can been seen in newspaper reports that we publish in other parts of this history website.

The school was the center of community activities until 1924 when the original Modella Hall was built on land donated by Athol Camp and destroyed by fire in November 1976. However the resilience of a very strong community saw fund raising for a new hall commence just one week later and the new hall was opened on 20th April 1979 by Arthur Dawson, and assisted by Athol Camp. 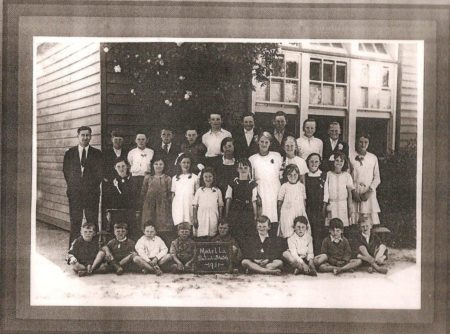 This is only the first part of our stories of Modella and we would encourage any former or current residents to post their own memories and photos or to send them to us for future use.