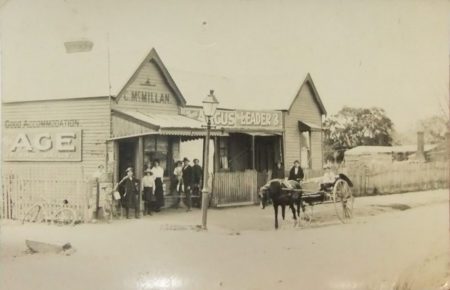 To say things have been difficult is an understatement, the biggest issue has been not being able to meet and discuss plans going forward.

Thank you to all the small number of members who have been meeting regularly before everything stopped.

Thankyou to our Secretary and Treasurer for their work, it is much appreciated.

Very little has happened in the last twelve months, although people continue to hand things in for us to look at or save.

We have been given a set of old Hall Committee minutes which we will gradually work through and then hand over to the current Hall Committee.

Also, several of Harry Dore’s football trophies from the 1930s have been given to us which I am hoping will eventually find a safe place at the Football Club when I get around to discussing storage with them.

The family of “Snowy Coal” have given me some wonderful photographs of “Snowy” at work which we will eventually use.

Ossie Rosenquist sat down with me to record his memories of Longwarry, sadly Ossie passed away not long after this.

I have a few other people prepared to record their stories but again the pandemic has put a stop to those, as the radio studio has not been available since February.

The school invited us to take some lessons again earlier this year and again this was not able to happen.
Despite no new material going onto the website people are regularly logging on in small numbers to either check or look at what is there.

So, as you can see the interest is still there.

The proposal is that the positions of President, Vice President, Secretary and Treasurer remain occupied by the current people, who have indicated that they are prepared to continue in these positions. This is an interim arrangement until a constitution has been finalised and the relevant details on roles, responsibilities Group objectives, and membership matters have been defined.

Over the years much of our work has been funded through Grants. The hosting of the website has been possible due to generous sponsorship from our Gold sponsor Bunyip & District  Bendigo Community Bank and Silver sponsor Leader of the Pack Dog Obedience. These sponsorship agreements were for two years and expired on April 30th this year.

The website hosting is being supported by the small amount of funds collected from membership fees but it is not sufficient to continue this beyond December 31st. 2020.

There are funds that are tied to a Government Grant for the production of Boards to be printed and placed in The Longwarry Memorial Park, Modella and Labertouche Halls but these funds must be used for that purpose.

In the years prior to the onset of the pandemic the Group had been active and established itself in the District as an organisation that was able to contribute significantly in collecting, publishing and bringing education of the District history to schools and the broader community.

Coupled with this was the work in identifying Nurse Mary Kennedy who was born in Longwarry. After some extensive research which was presented to the RSL, it resulted in them adding her name to the Memorial at its Centenary 100 years after it should have been inscribed.

Everyone involved is to be congratulated for these outcomes. The challenge now as we come out of restrictions is to regain momentum and to plan how we will involve ourselves in the District community.

Again, thank you to all involved;