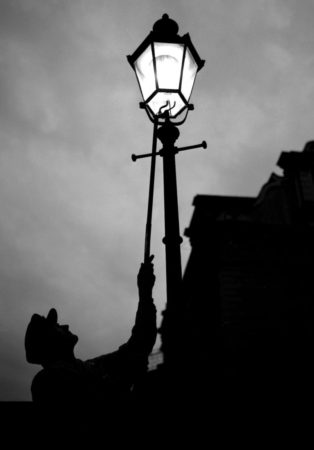 After we posted the story of Fred Reincke and The Gum Leaf Gas Company last month, the most asked question we have had is “So What happened?”

Below are the two newspaper accounts of both a Buln Buln Council Meeting and then a Public Meeting that decided the fate of his proposal to light the streets of Drouin.

LIGHTING OF DROUIN BY GAS.

A report was made as to the committee meeting and deputation to Longwarry on the gum leaf gas question, accounts of which have appeared in these columns. Cr Notman said from the estimated increased cost he recognised the matter was a serious one. Looking at it from a business point of view would the residents of the township be willing to bear the increased expenditure. He considered the township was only in its infancy and to have an extra £60 per annum saddled on it would come pretty heavy. He was sorry to say he could not support it at present.

Cr Watts said there was no doubt the gas would result in an increased cost but would not the benefit to be derived be much greater to the town and inhabitants. He remembered some towns where gas had been installed and it was like going from darkness to light. He had no doubt that the increased cost would be more than counterbalanced by the increased value of property in Drouin. There had been no action by the residents in the matter and therefore he did not see how the council could deal with it.

Cr Winters said this was a matter for the townspeople alone. He had seen the light and it was beyond any of his expectations, as to his mind it was far and away above any other light. He did not think the increased cost would warrant them in undertaking the matter. It was reckoned at £110 but before it was done it would be nearer £120. Some people said they could do with less lights but he did not think so. He would like to see the light in Drouin as it would be of immense benefit but the expenditure was too much at present. He was not inclined to take the responsibility unless he was backed up by the residents of the town. If they held a public meeting and approved of the matter well and good but till then they could not do anything in the matter.

Cr Kennedy supported Cr Winters’ remarks. If the meeting backed up the council that would settle the matter. Drouin had got to pay for it and therefore the other parts of the Centre Riding could not object. He would like to see the light in Drouin and was sure it would prove of great benefit. Like Cr Watts he thought it would improve Drouin as the present light was very little good.

Cr Hardie agreed with the previous speakers. He had seen the light and it was equal if not better than any he had ever seen. He would be pleased to support the matter if a meeting of the residents backed up the council.

The President thought the suggestion of a public meeting of the ratepayers a good one. The representatives were not going to take the responsibility of the matter on their shoulders. It was only fair the ratepayers should speak on the matter. Cr Watts said this was an opportunity for the inhabitants of the township and if not seized the opportunity might not occur again for a long time.

He moved “That the President call a public meeting to consider the matter.” This was seconded by Cr Winters and carried.

A meeting of the ratepayers was held in the Mechanics’ Hall, Drouin on Tuesday evening last for the .purpose of considering the question of introducing gum leaf gas to that town. Cr Ward, President of the Shire, occupied the chair, and was supported on the platform by Crs. Kennedy, Winters, Hardie, Watts, and The Shire Secretary.

There was about 100 ratepayers present in the body of the hall. In opening the meeting the chairman stated that it had been called for the ratepayers of the township to decide whether the gum leaf gas should be installed there or no. The time had come for adopting something in the way of better lighting, and in all probability it would prove a blessing especially to those persons who were out after nightfall. The council did not see their way clear to decide this matter, especially as it involved an extra expenditure on the present system. It was in the hands of the meeting to adopt the idea or not.

Mr. J. G. Young said the majority of the ratepayers were not very conversant with the matter. He, for one, had not seen it. Perhaps somebody would explain the mode of introducing it and its probable cost.

Mr. Parkes, who was asked to do so, then dealt with the question in all its details and stated that the promoters considered that as the light had been first brought out in the shire, this Shire should have the first offer. He might say that everyone who had inspected it had said it was far superior to coal gas and it was considered nearly equal to the electric light.

Besides the light it must be remembered that a new industry would be started in gathering the leaves, and it was thought that 5s to 6s per day would be easily earned. In answer to a question Mr. Parkes stated that the cost to the council would be £5 per lamp per annum.

Mr. McKenzie wished to know whether all the ratepayers would be liable for this.

The President – No, the only ones responsible are those in the township.

Mr. Nickell – What would be the increased rate on township property?

The Secretary – There was no question yet as to an extra rate. The extra expense would be £60. The township revenue is £200 and under the present proposal it would take £110 to pay for lighting. If they required the same amount of revenue to be devoted to the roads they would want an extra rate for the lamps.

The Secretary-Yes, the company will provide the lamps and look after them.

A Mr. Hearn said according to the statement made by the Secretary there would only be some £90 to devote to the roads.

The Secretary – Yes that is so.

Mr. Winters said he had seen the gas and it was certainly beyond anything he had expected to see. If it was not for the want of funds he would have no hesitation about the matter. He was satisfied it was for the benefit of the town to have it, and it was for the ratepayers to say whether they would have it or no. On the present revenue it would be impossible to accept it unless the ratepayers came forward and agreed to pay an extra rate. The present system was far from satisfactory, but that was owing to the price given being too low.

Mr. Blythe asked what extra rate would be required.

The President – As nearly as possible a 3d rate would cover the extra expense.

Mr. Roberts moved “That the gas be established in Drouin and an extra rate be struck.”

Mr. Cleary said to test the meeting he would second the motion.

After a short desultory discussion the motion was lost, the voting being 8 to 5, many ratepayers in the hall not voting.

The meeting closed with a vote of thanks to the chair.

Drouin streets were lit by electricity not long after in 1904 when the Milk Factory began generating their own electricity to run the factory and this was extended for Drouin Street Lighting.

But What About Fred?

We don’t know when he left Longwarry but by 1912 he was living in Newtown in Sydney where at 43 years of age he married Clara Ann Owens on August 20th. 1912.

We thank the Reincke-Goodwin Family for that information.