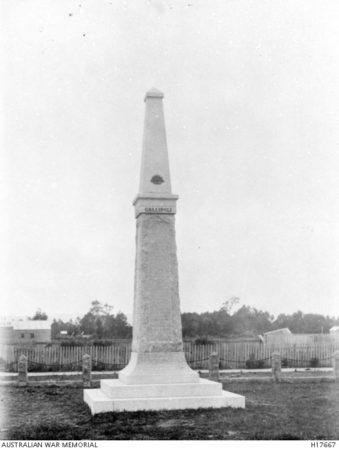 But where did it all begin and how did it happen?

By 1917 the war overseas was reaching a new stage, it was obvious that it was not going to be over quickly. News of local men killed at Gallipoli and on the Western Front had been coming back for several years and spreading through the District by regular newspaper lists of casualties. Seriously wounded boys were coming home, men such as 21 year old, George Bisset from Longwarry, who had lost an arm and Hugh MacDonald from Labertouche who had been seriously wounded in the legs, were stark reminders of what was happening thousands of kilometres away.

A group of Modella, Labertouche and Longwarry residents decided that some form of committee was needed, so in May 1917 The Longwarry Soldiers’ Memorial League began.

Their purpose was to welcome home the men returning from the war, a public reception was given to them, along with a gold medal. For the mothers and widows of those men who would not return, commemorative plaques and certificates were presented.

This Committee decided that they should also raise money for a permanent Memorial to all District men and women who served and that it would be placed in a prominent position in the town.

On November 12th 1919, just a year after the war ended and marking the first Remembrance Day, the granite Memorial that had cost 300 pounds and stood 18 feet (5.5 meters) was dedicated.

A reporter from the Warragul Gazette of November 25th. 1919 wrote”

“Longwarry was en fete on the afternoon of Wednesday, 12th inst., the occasion being the unveiling of the memorial erected by the residents to perpetuate the memory of “fallen” soldiers and of those brave boys who had enlisted from the district. The town was gaily decorated with flags and bunting of every description (says the “Bunyip Express”), and the vast concourse numbering 2000, were loud in their praise of the successful efforts of the committee.” …..

……..“Visitors were present from all surrounding districts, and Longwarry never looked prettier or busier than on that afternoon. At 2:30 about 100 returned men lined up outside the Mechanics Hall and headed by the Iona and Longwarry Brass Bands, marched to the memorial site, which was surrounded with spectators.” …….

……..The Hon J.F. Mackey congratulated the people of Longwarry on what they had done in erecting the monument in such a prominent site, as it would be seen by thousands of travellers along the road and in the trains, who would learn that it was erected in memory of 119 heroes from Longwarry……

……..“Captain Bruce, MP for Flinders after delivering an able speech in which he paid a sterling tribute to the 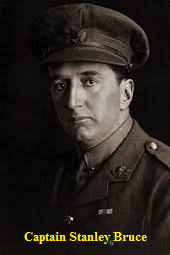 Australian soldier and related incidents he had seen during his travels abroad, said it was a privilege and honor to unveil the memorial, which he did amidst loud applause. The audience stood in silence for a few seconds out of respect to those who would never come back.”

(The Captain Bruce MP mentioned in the newspaper report was actually Stanley Bruce, who just a few years later was elected the 8th Prime Minister of Australia.)

To mark this Centenary the Longwarry RSL with The Longwarry and District History Group are preparing a very special service this Remembrance Day November 11th with a re dedication and an historic event that was missed 100 years ago. Please mark it in your diaries now and come along.

There will be more of this story next month,.