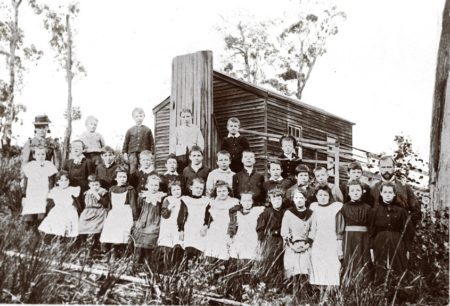 With the decision to construct the rail line from Oakleigh to Sale in 1874, came a series of small camps along the line, mainly consisting of sleeper cutters using the abundance of timber beside the line for the necessary rail sleepers.

By 1875 the railway had arrived at Bunyip and from the east as far as Morwell. The Noonan Brothers gained the contract to cross the Bunyip River and connect the remaining section of line.

However they failed to complete it and the contract ended up with Fishburn and Morton for just over 85,300 pounds or $170,600 for those of you born after 1966.

On its completion a 30 hour coach trip from Melbourne to Sale was now a “comfortable” (as long as you didn’t mind the smoke and hot cinders on your clothes) five hours.

When the Bunyip River was crossed two small communities bloomed. The first was at The Rock Cutting about 11/2 kms east of Longwarry. It was a purpose built site, specifically for the workmen constructing the railway line. (For those travelling by train to and from Drouin these days, you will be familiar with the Cutting that the train travels through.)

The second was where Longwarry town is now located. Again a small community of sleeper cutters in 1877, with a rail crossing for the road that went north to the main Gippsland road (now the highway) and south towards the large pastoral lease known as Longwarre (we believe that this was its initial spelling) and it was simply known as The Siding.

When Donald Fraser moved his mill from Drouin to The Siding it became known as Fraser Siding and subsequently Longwarry after the pastoral lease that had holding yards there for the cattle that were to be transported to the abattoirs in Melbourne.

As we know the railway line attracted the timber industry which in turn attracted workers and their families along with shops and the beginnings of farming on the cleared land.

Families meant children and children meant schools were needed and after the State of Victoria became self-governing in 1855 a rapid flow of Parliamentary Acts followed and the one that effected the kids of the District most was the 1872 Education Act.

Education was to be free to all who wanted it and it was compulsory that if a child was not attending a recognised School, then parents had to show that suitable alternative arrangements were made.

Schools in the District came about in two different ways as needs demanded.

Saw mills were built north of the town amongst the timber that was being harvested and the timber cutters lived around the actual mill site with their families.

Daily travel into towns from these mill camps was impossible and it was not unusual for the mill owners to set aside a building as a classroom for the children of their workers.

In the small but more permanent communities, more traditional methods for establishing a school were undertaken, generally by the community petitioning the Government to provide a school and teacher.

Saw mills were set up where the timber was and a community of workers and their families lived on site. It is presumed the mills that were too far from a recognised established School made their own arrangements, just how many we don’t know, but we can illustrate the unique nature of these schools by looking at two or three.

In his book Gippsland – people, a Place and their Past, local historian and author John Wells recounts the following story:

“When William Steele was appointed to Freeman’s Mill School (Labertouche) in 1882, he arrived at the site to find it totally abandoned. He walked further out along the timber tramline for another three and a half miles, only to find the school being dismantled for its next move. He conducted classes in a private dwelling until the school was reopened.”

This constant movement of sites was not uncommon as the reason for these small communities existence was the timber and as it was cut out, it was easier to move the mill than transport logs to it.

It was also not unusual for the mill schools to operate part time, students having to travel on a few days a week between sites. For example Donald Fraser’s mill school, had teacher Pat O’Donnell in charge of the youngsters and in 1893 the school began to operate part time with the Collin’s mill school at Jindivick North and teacher O’Donnell had to travel between them, no doubt a slow and very uncomfortable trip in the dead of winter mornings.

Many of these Schools were short lived as for whatever reason a mill closed down the community left and so did the school and the teacher was looking for a job.

W.H.Collins also established a school at his Labertouche Creek site in 1889 with James McCarthy as the teacher. Mike McCarthy in his book, “Settlers and Sawmillers” describes its construction:

“Previously the children of the mill workers were forced to walk or ride the eight kilometres to the Labertouche School each day, a journey long enough but made untenable by the impassable state of the track during winter. McKay (the mill manager) organised the construction of a 30ft by 14ft school building at the mill.”

Then by way of another example of the mobility of the mills and their schools, when Collins moved his Labertouche Creek mill to Robinson’s Creek in 1891 the school also moved and with just 17 pupils it operated part time, again with the The Labertouche School and the kids, along with the poor teacher, were back to a seven kilometre walk or ride a couple of days a week.

In another instance of this mobility of schools and their communities, Collin’s moved his Ryson’s Creek mill to Tea Tree Creek in 1901 and once again the distance from the original Robinson’s Creek School was an extra 1.5 kms, so the school was on the move again.

All of these bush schools pretty much came to an end in 1926 when massive bushfires from Noojee to Powelltown illustrated just how dangerous whole families living in the bush could be and the inhabitants moved into the towns. The more established schools that were on cleared land used for farming, such as Labertouche and Longwarry North, continued to operate and grow.

Another way of getting the kids an education

The communities in townships and the open areas out of the bush also had to comply with the 1872 Education Act. Travel, particularly in winter, was none too easy and as a result many small schools opened up around the District.

There seems to be a confusion of school names surrounding Longwarry itself, no doubt as a result of just how big the Longwarry pastoral lease was.

For the purpose of this part of the story the first school for the probably reluctant kids of Longwarry was actually The Rock Cutting School, sited at the railway workers camp at the Rock Cutting east of the town; it opened the doors in 1880.

This school was originally operated by some mothers of the students and it was expected that students from the township would walk up what is now Boxshall Road and along the railway line to attend if their parents wished.

In 1881 William Rhodes petitioned the Government for a school in the town with a prospective enrolment of 30 students, but little had come of it in 6 months.  Saw mill owner Donald Fraser came on board and wrote to The Board of Education in January 1882 and again in April.

Finally it was agreed to lease a 28 feet by 12 feet weatherboard building with a bark roof on the corner of Drouin Road and Mackey Street from Mr. Rhodes. The Longwarry State School No. 2505 opened on July 1st. 1882 and operated on a part time basis with the Rock Cutting School with Maria McBride as teacher of both schools.

In 1883 the Education Department decided that both Schools should operate full time and Maria McBride took on the job at Longwarry Township.

Complaints from parents and the teacher to the authorities about the suitability of the Rhodes leased building were frequent and by February 1884 the Department decided to build a new permanent School and chose a site along what is now Boxshall Road, meaning they could close the Rock Cutting School and combine the two Schools on this new site.

Even in those days school closures were being suggested and received the same response that is so often seen today. Few people wanted the amalgamation and the towns people did not want the site and that was the end of that.

In May 1884 the department chose a site for a permanent school exactly where it is now and a 24 feet by 16 feet school with a 3 room attached residence was built by October and the Longwarry children moved in to start the School year in 1885.

Maria McBride was glad of her new school and remained in charge until 1894 and she was followed by another woman headteacher, Marjory Dollar who kept the youngsters of Longwarry in line for ten years from 1894 to 1904. 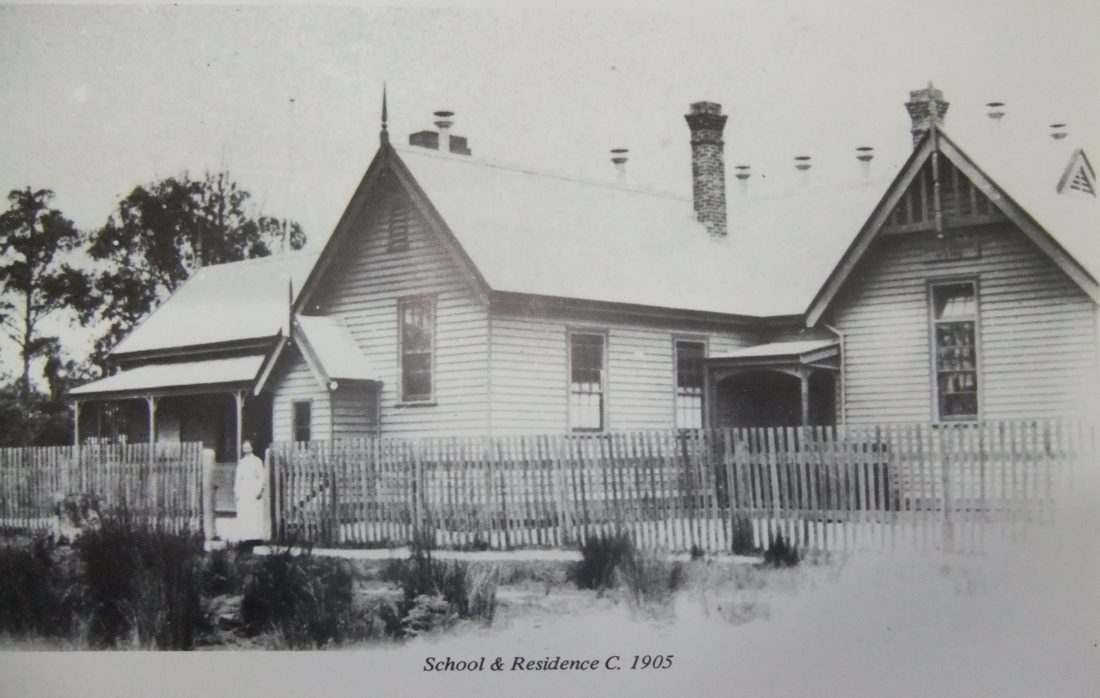 There are many of us who still recall being taught in that building into the 1960’s and the bell tower on the far right of this photo that summoned us to line up for inspection.

As an aside getting kids to School may have been the biggest problem, as a report from 1889 shows that 87 students were enrolled but barely half attended.

But what of the Rock Cutting School? It was certainly still in operation in 1885 with 17 pupils as records show that the Board of Education wanted to close it and for the students to travel to the School in Drouin. This was not an acceptable alternative to the families, as travelling to Drouin was a very difficult trip and almost impossible in the winter months.

The Rock Cutting School closed its doors in 1886, presumably the children came into Longwarry, although the actual Rock Cutting Camp would not have lasted long after this date anyway.

Primary School No. 2505 remains on the McRae Street site bought in 1884 and has a current enrolment of around 140 students.

We would dearly love to extend our story of early education and are currently trying to research histories for the closed schools of Longwarry North and Modella along with Labertouche, which remains open with approximately 30 students. Can you help?