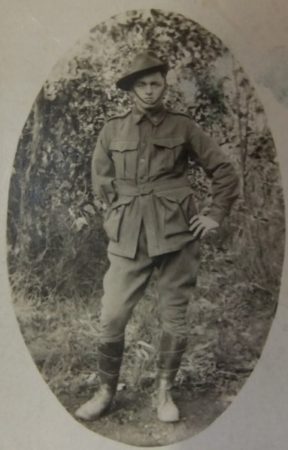 On July 22nd. 1915 George Webster Bisset joined the Australian Imperial Forces (AIF) as a teenager, just 18 years and 10 months of age and just 12 months after the War had begun and just 3 months after The Gallipoli landings.

Whilst there may still have been a sense of adventure in his actions, by now the casualty reports would have been coming back and published in Australia and there could have been no doubt that with his enlistment George and his family now had the realisation that he would be going a long way from Australia, possibly for a very long time and that he would face serious danger.

His father William, as next of kin, had to sign permission for young George to be able to join and we can only imagine the trepidation with which his father signed that authority.

After his medical examination young George was declared physical fit and for about 3 months he was in a training camp at Broadmeadows.

On his induction George Bisset was described as a single man who had worked as a labourer. He was 5ft 91/2 inches tall (about 175cms), weighed 160 pounds (about 72kgs) and of fair complexion.

On October 12th. 1915 he boarded a ship for England having been assigned to the 6th. Reinforcement Section of The 22nd.  Battalion of the AIF.

The 22nd. Battalion were resting in Egypt in January 1916 after being evacuated from Gallipoli so that when George caught up with them in France the troops would have been well rested but they would be able to tell him first hand of some of the worst of the Gallipoli Campaign. Hopefully that experience and the seasoned veterans in the Battalion would be able to educate and help the young reinforcements that had come with George from Australia.

By March 1916 the Battalion had arrived in France, we are not sure when Private Bisset caught up with them but by April the Battalion were well in the thick of it all and George Bisset would certainly have been amongst the fighting by this stage.

One of the worst of these was The Battle of the Somme which is given as beginning on July 1st. and lasted for 140 days. It was fought on a 15 mile (24km) front, to give some perspective to that it is about the distance from Longwarry to Pakenham.

It was on the first day, July 1st, that Pte. Bissett was wounded, a gunshot wound to his arm which resulted in a severe compound fracture of his humorous.

George was evacuated to a hospital in England on July 3rd. 1916 and his injury was so severe that his arm had to be amputated.

George spent the next 5 to 6 months convalescing in England before boarding a ship on January 14th. 1917 to be returned to Australia arriving home on March 3rd. of that year and being finally discharged from the Army on the 17th. of April 1917 to return home to Longwarry. 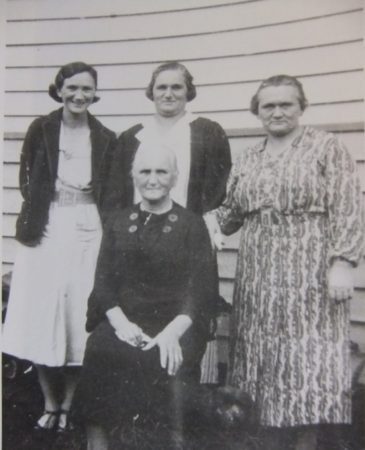 The Bisset Women Back Home. Photo coutesy of Mary Davis

Mary Alice Sherriff was born on April 6th. 1890 in Longwarry, she was the daughter of Alfred Sherriff and Maria Anne (nee) Auchetto. Prior to her enlistment Mary had been nursing at the Warragul Hospital and her mother was listed as next of kin, which generally meant that by this time her father was deceased. The family had obviously moved as the address of her mother was given as A’Beckett St, Bunyip.
Mary enlisted on the 27th. of February 1918 with The Australian Army Nursing Service (AANS) at 27 years of age and was allocated to The British India Nursing Service in India.

She had very little time to adjust or to get organised as just days later, on March 6th, Nurse Mary embarked from Melbourne on the ship ‘Ormonde’ for India.

Whilst much has been written in recent times about the World War 1 Australian Army Nursing Service in Egypt and France, and rightly so, one must not forget Australian nurses were on active service in India and Salonika and whilst many of the medical challenges were quiet different to their sister nurses on the Western Front, it was still every bit as demanding, in conditions which were never ideal.  Even official histories of the Australian Army Medical Services during the First World War contain little about these “Aussie Girls.”

When the war escalated in Mesopotamia in 1916, (geographically Mesopotamia is roughly what we now call Iraq), personnel were needed to nurse the sick and wounded troops.

The Indian hospitals were overwhelmed with the sick and wounded and were looking for help. That help came in the form of Australian Army Nurses who were sent to small hospitals all over India, as well as on the British Hospital Ships from India westwards to the Persian Gulf and eastwards through to Hong Kong and Vladivostok.

Compared to the work of their “sisters” in France and Egypt, they had experiences that varied widely, there were the usual wounds and illness, but they found themselves confronted by cultural differences and languages with the local staff and the English Sisters were somewhat dismissive of the girls from the Colonies. The exotic diseases in tropical climes with primitive medical facilities and coping with a vastly different climate were all trying, but they took it all in their stride.

Actually the AANS nurses were not overly happy about being sent to India, not because they thought there was not a need, or because it was India, but rather they felt it was more important to be joining their “brother’s and sister’s” in Egypt and France. Both the Australian and Anglo/Indian Governments did not help much, as on enlisting and leaving Australia these nurses were told that they would stay in India for six months, then move closer to the fighting, however the Indian authorities disregarded such a time limit.

This certainly did not please the nurses and conditions and poor pay, below that of the British nurses that they worked beside, quite understandably did not help, yet they overcame them to serve with devotion and professionalism.

From diaries and reports, serving in India was unusual, a challenging, exciting but frustrating duty, many were disappointed, but the way in which they carried out their tasks and cared for the sick and injured was as good as any could have hoped for.

Nurse Mary Sherriff was typical of so many; she arrived in India on March 26th. 1918 and was immediately on duty at the Colaba Hospital in Bombay and as an example of conditions she was soon admitted to hospital herself on March 30th.  having fallen sick with small pox.

So severe was her illness it took a month to return to duty and on August 8th. Nurse Mary found herself working at a hospital in Barrackpore, West Bengal.

In July 1919, she was on the move again to join the 34th. Welsh Hospital in a place called Deolali.

Deolali has been described as being notorious for its unpleasant environment, boredom and the psychological problems of soldiers and nurses that spent time there. Its name is the origin of the phrase “gone doolally“.

Finally Nurse Mary’s tour of duty away from Australia was coming to an end, and she boarded a ship on November 11th 1919, travelling via Singapore and finally to Fremantle, arriving back in Australia on December 21st. 1919.

However the agonising wait to get home to Gippsland and family was not over as she had to wait for transport to travel overland, leaving Fremantle on January 19th. 1920 and finally arriving back in Melbourne on January 23rd.

Her service with The Australian Army Nursing Service ended on September 6th. 1920

We know that after the war Nurse Mary married a man called Archibald Duncan and lived at Chelsea in Victoria.