Nar Nar Goon Football Club as a 28 year old, by the Richmond Football Club in 1928, but he played much of his early football at Longwarry.

The Bisset family had a small workman’s cottage directly across the road from where the Longwarry Hall now stands.

He left Richmond to coach Nhill in country Victoria, but was lured back to the big time in 1932 by South Melbourne.

He was made their captain and coach the next year and had an immediate impact on the Club, leading them to their first premiership in 15 years.

He remained Coach until the end of the 1936 season having reached the Grand Final in every year. South Melbourne however could not repeat their 1933 success, losing the Grand Finals by 39, 20 and 11 points respectively.

He also played with Port Melbourne in the VFA.

Having won 63 of the 80 games that he coached, Jack Bisset was named coach of the Swans’ official ‘Team of the Century’.

He played 128 VFL games in total – 38 with Richmond and 90 with South Melbourne.

Football Club. His family had a “milk bar” near the hall, which many will remember as owned by Laurie Edwards before it closed down, and for those too young to remember those days, it was opposite where the Bowling Green is now. The McAlpine family had a home along Flinders Road.

His first Club was Footscray where he played as a wingman and regularly represented Victoria in interstate football.

Having captained Footscray in 1933, he crossed over to Hawthorn where he had accepted the role of captain-coach. Despite retiring as a player in 1937 he stayed at the Club for the following season as coach.

Ivan McAlpine played 112 games for Footscray and 67 games for Hawthorn. His coaching record at the Hawks was 72 games for 22 wins and 50 losses.

Peter Knights (born 30 March 1952) as I am sure we all know, Peter was recruited 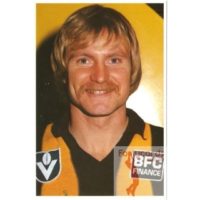 directly from Longwarry Football Club as a teenager in 1969 and played his first game in round 9 of the same year.

After his debut season, Peter became a regular pick in the senior team in 1970 as an 18 year old. After just one full year Peter was selected for the Victorian State team in 1971, winning the Simpson Medal for the best on ground in the match against Western Australia in Perth. However, in the same year he missed out on Hawthorn’s 1971 premiership win because of a knee injury.

On his return the next year he continued his outstanding form, generally at centre half back but on occasions also playing forward, he was renowned for his high marking skills and fearless play, never avoiding body contact but regarded as one of the fairest players in the game.

In 1976 Peter suffered a broken collarbone early in the match against Footscray in Round 14, which ruled him out for the next seven matches. Despite this, he still managed to come second in the 1976 Brownlow Medal count, polling an astonishing 45 votes (in those days both field Umpires gave votes) to finish three votes behind Essendon’s Graham Moss. Despite this disappointment he was one of Hawthorn’s best players in Hawthorn’s Premiership.

In 1996 Peter was recognized for his contribution to the game when he was among the inaugural inductees into the Australian Football Hall of Fame and later, in the Hawthorn Team of the Century.

Peter was also inducted into the Longwarry Football Club Team of The Century, an honour that he has said is up there with any other honour he has been awarded.

After his playing career Peter coached the Brisbane Bears (now Brisbane Lions) for 59 games from 1987 to 1989, in what was the most difficult of times for the start-up Club. From 1994 to 1995 he coached Hawthorn for 45 games.

We know others from Longwarry have also played, or gone close to playing, in the big time. Players like Joe Prout, a big forward, who played in Hawthorn’s 1961 reserves side alongside David Parkin who was just starting his league career.

If you know of any more let us know so that we can also acknowledge them.