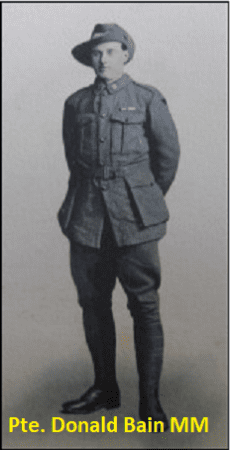 Donald Bain was born at Malvern in June of 1888.

Before the outbreak of war in 1914 the family had moved to Longwarry where his father George Bain was the Post Master at the Longwarry Post Office.

Donald Bain enlisted in The Australian Imperial Force on the 17th. of July 1915 at 27 years of age and on the 4th. of August he entered a training camp at Seymour in Victoria.

Donald Bain had previously tried to enlist, but records show that he had been rejected because of teeth problems, but not to be denied he obviously went off and had something done about them and tried again.

His records show that he was single and had worked as an orchardist, he was 5 feet 7inches tall (about 171cm) and weighed 9 stone 9 pound (about 60kg), of dark complexion, with black hair and blue eyes, no doubt a striking looking Aussie bloke in the prime of life.

In September he was placed in the signaller training school at Seymour and on the 8th. of January 1916 he was appointed to the 5th. Reinforcement Brigade of the 22nd. Battalion.

On completing his training Donald, along with 154 other recruits of the Brigade left Australia to join the Battalion at Alexandria arriving on March 19th. 1916, where his training continued in Egypt. No doubt an adventure for Pte. Bain as he probably did a fair amount of sightseeing of the various tombs and pyramids.

The 22nd. Battalion had been evacuated from Gallipoli in the last days of that campaign 1915, where they had suffered huge losses and their time in Egypt was for rest and to wait for reinforcements to arrive from Australia.

To have battle hardened experienced troops around them would have been a great benefit to the newcomers, however they also would have heard the stories from Gallipoli which would have been a sobering thought for the recruits as they began to understand clearly the dangers that they would face.

By March the Battalion were on another boat and landed at Marseilles in southern France and then moved over land towards the battle fields in the north. The first elements of the Battalion arrived at the front line on April 4th. so, it was not long from then that Pte. Bain would have experienced his first battle.

On the night of the 4th and 5th of August 1916, the 22nd Battalion went ‘over the top’ with all four Companies attacking the German Second Line at Pozieres. Of the 79 men of the 5th/22nd that went into attack that night, 33 would become casualties, Pte. Donald Bain suffered gunshot wounds to the face and legs and on August 6th. was evacuated to the 26th. General Hospital at Etaples in northern France.

The worry for his family back in Longwarry must have been terrible; they received a very brief telegram on September 6th. with absolute minimal details, and as the only way of getting mail to and from the war took at least a month either way they would have very little idea of how he was recovering.

He spent 4 months in hospital and at a recuperation base before returning to duty with the 5/22nd. on January 9th. 1917.

For the next 9 months Pte. Bain would have experienced frantic activity along with periods of boredom as was often the way in the war.

On October 3rd. the 22nd. Battalion moved up to an area around Ypres in Belgium and preparations for a massive attack on German lines was planned for the next day.

Pte. Bain’s section were assigned the task of capturing Broodseinde Ridge. The battle lasted for 6 days and it was on October 9th. that Pte. Donald Bain of Longwarry won the Military Medal for bravery the citation written by his commanding officer recommending the medal reads as follows:

‘As linesman he laid a telephone wire overland through extremely heavy shelling. Though sniped at incessantly and subjected to Machine Gun fire he continued at his work, and throughout the whole of the operation and the succeeding night he maintained communication and repaired breaks. His work proved of the utmost value and information came back quickly to Headquarters, thus facilitating the conduct of the operation.’ 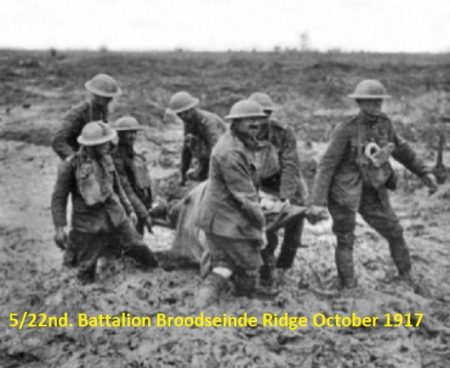 Apart from another 3 spells in hospital for illness, Pte. Bain continued fighting with his mates right through to the bitter end on November 11th. 1918. By this time he had been promoted to Sergeant.

Private Bain MM survived the war, but did not return home until later, in October 1919, because he had to wait for the Australian government to provide him with a second transport ticket for his new wife, 26 year old Jessie Welsh, a Scottish girl, who we suspect was a nurse that he met when in hospital, as his records show that he never went to England until the war was over. We like to think that perhaps Jessie nursed our local Longwarry boy back to health in hospital after he was wounded.

No doubt Donald Bain expected all kinds of experiences good and bad when he enlisted, we are confident that meeting his future wife was not one of them.

Donald Bain was discharged on December 10th. 1919 and the last note of Pte. Donald Bain MM we have is that he was living in North Balwyn in 1967. 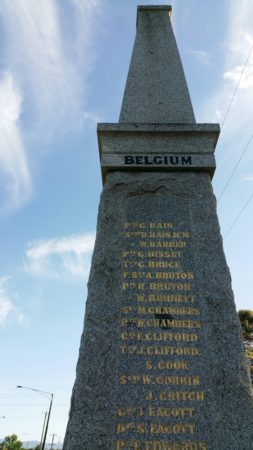